Welcome to Danang Golf Club (The Dunes Course) and welcome to a place where golf’s history is revered as much as the game itself. Here, along Vietnam’s stunning Central Coast and amid a seaside landscape almost identical to what the world’s first courses were carved from, an experience was crafted as much by Mother Nature as it was by the legendary Greg Norman. In other words, it’s links-style golf in the truest sense of the term.

Just because the game of golf didn’t originate in Central Vietnam doesn’t mean the region is short on history. A mere 15 minutes south of Danang Golf Club lies the ancient trading port of Hoi An, which for centuries possessed the largest harbor in Southeast Asia. It’s still as charming as ever, thanks to its UNESCO World Heritage status and its people, whose friendliness is as obvious as the town’s rich architecture. Closer to the club, a 17-kilometer stretch of beach that Forbes ranks among the top 10 in the world beckons sun seekers and day dreamers alike. Hue, the former imperial capital of Vietnam, is just two hours’ drive north.

When Greg Norman checked in on the progress of the Dunes Course, in March 2010, he said: “The fact is, you’d be doing a very poor job to make a boring course out of a site like this.” Certainly Mother Nature had a gigantic hand in the formation of a layout that evokes an experience often found in seaside courses in the British Isles and southeastern Australia. But make no mistake: This is Vietnam. One look at the stunning, par-3 16th hole – back-dropped as it is by traditional, long-tail fishing boats that troll the warm waters of the East Sea – is all it takes.

When it comes to professional golf achievements, few players in the history of the game are in the same category as Greg Norman. During his prime, he won 86 international titles, including two British Opens. In 1987, The Shark (as he came to be known) took his profound knowledge of the game and made the official jump into the design industry. He formed Greg Norman Golf Course Design (GNGCD) and the rest is history. Over the past quarter century, GNGCD has created more than 70 courses on six continents and established a reputation for imaginative designs that acknowledge golf’s traditional origins and the landscapes on which it has been played.

Like the design of the course, the 4,000-square-meter clubhouse echoes the gently tiered contours of the dune topography on which it is set. Glass curtain walls and meshed cladding enhance the sense of a natural, spontaneous transition from exterior to interior — an atmosphere that is inviting rather than grandiose. What’s more, the array of food and beverage options — including the comfortable cafe (Persimmon) and the rooftop lounge (Hickories) — make for a “19th hole” on par with the most amenity-rich resorts in Asia. 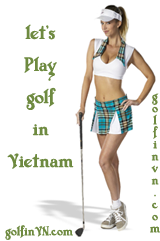